Essay on Hindu Marriage – Among the Hindus, marriage is not a social contract; it is religious sacrament. Marriage to a Hindu is of great individual and social significance. It is a socially approved union of man and woman aiming at procreation, pleasure and observance of certain social obligations.

The Hindu ideal emphasises the individual as well as social aspects of marriage. K.M. Kapadia in his “Marriage and Family in India” has given much information in support of the view that Hindu marriage is a sacrament. His explanation can be analysed from three angles: (A) aims of the Hindu Marriage; (B) Main rituals Which are involved in the Hindu marriage; and (C) the basic beliefs and values underlying the Hindu, marriage.

(A) Aims of the Hindu Marriage:

As Kapadia has pointed out, the main aims of the Hindu marriage are: ‘dharma’, ‘praja’ and ‘rati’. Of these aims, dharma is given the first place, ‘rati’ or pleasure is given only the third place, and ‘praja’ or progeny is given the second place. 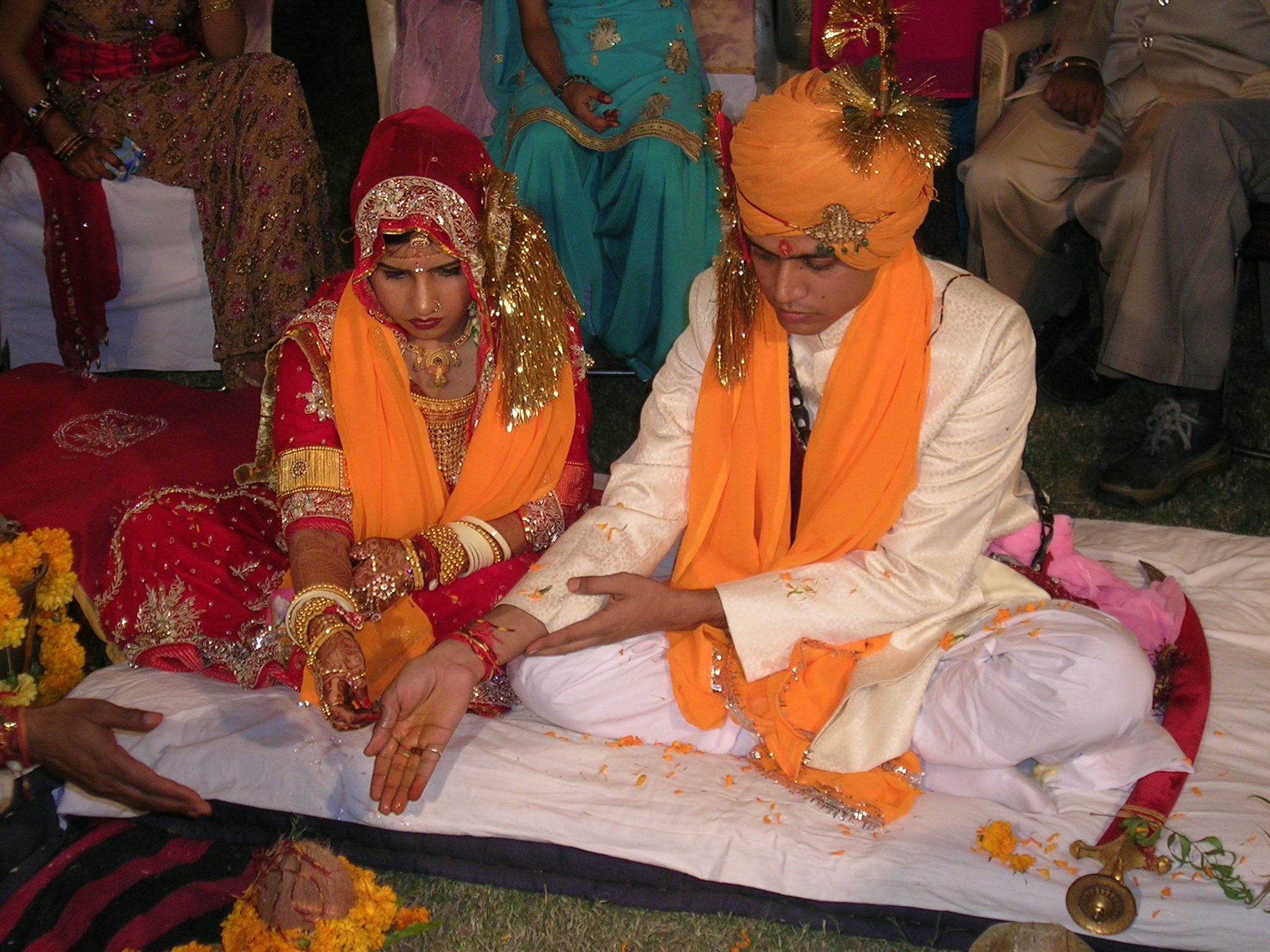 The Hindu thinkers regarded Dharma as the first and the highest aim of the Hindu marriage. Marriage is desired not so much for sex or for children as for acquiring a partner for the fulfilment of one’s religious duties.

On the marriage, the sacred fire is enkindled, and it is the duty of the householder to offer “panchamahayajnas” daily in the company of his wife. These obligations would cease to exist only on the death of the householder.

They get disturbed on the death of the wife, and hence the house­holder could marry immediately a second wife. The basic aim of marriage is Dharma for it necessar­ily involves the fulfilment of a number of moral duties.

The desire to get issues or children is completely felt by all the people. Psychologists call it parental instinct. The desire for ‘praja’ or progeny is regarded by the Hindu Shastrakaras as one of the sacred purposes of marriage. The Upanishads have also stressed the continuance of the line of progeny. Getting a son is essential for a Hindu, for it is believed that one can fulfil one’s “Pitri Rina” [paternal obligations] only by getting a son. It is ‘Kutumba Dharma”[family obligation] also. In one of the important marriage rituals called “saptapadi” also the husband prays to the wife to fetch children for the family.

Though sex is one of the functions of marriage it is given the third, place. It is least desirable aim of marriage. To stress the lower role of sex in marriage, the marriage of a Shudra is said to be for pleasure only. The Brahmanic legislations enjoin that the Shudra wife would be taken only for pleasure. However, sex is never condemned or degraded. It is given the third place because dharma is more expected of ‘vivaha’ than ‘kamal’.

Among the Hindus there are certain rites which must be performed for marriage to be com­plete. The main rites are: vagdana, kanyadaana, homa, panigrahana, saptapadi and mangalyadharana. These rites and the importance attached to them have added to the sanctity of the Hindu marriage.

In the presence of the people gathered for the marriage the names, gotras and pravaras of the bride and the bridegroom are announced along with the announcement that they are ready for the marriage. This ritual is known as “Panigrahana sankalpa” or Vagdana.

‘Homa’ refers to the offering in the sacred fire. A number of ‘homas’ or fire rituals are observed in the marriage of which “Laja Homa” is an important one. This ‘homa’ is symbolic of fecundity and prosperity. Fred grains dipped in ghee are offered to fire [that is to Lord Agni] by the couple with a prayer to the God requesting him to bless them with progeny and prosperity.

The father of the bride gifts her away to the bridegroom with a promise on his part that he would not transgress her “in the attainment of piety, wealth and desire”. The same promise is repeated thrice and the bridegroom affirms his promise thrice.

(iv) Panigrahana [Holding the Hand of the Bride]:

This ritual refers to taking the right hand of the bride with the words: “I seize thy hand for the sake of happiness that you may live to old age with me…” With this the bridegroom takes the responsibility of look­ing after the bride.

(v) Mangalaya Dharana [Tying of the Tali or Mangalasutra]:

This involves the act of tying the tali or mangalasutra [which is regarded as the sign of longevity of the husband] round the neck of the bride by the bridegroom. This ritual for which there is no reference in the Dharmashastras is more in practice in South India than in the North. It has even influenced the Catholic Christians of the South. [In north India, particularly in Bengal, Bihar, U.P. and Orissa the binding part of the marriage ceremony is “sindurdan” or paint­ing of the part of the hair on the bride’s forehead with vermilion and putting lac bangles in her lands by the groom – C.B. Mamoria.

This is the ritual in which the bride and the bridegroom go ‘seven-steps’ to­gether. The husband makes the bride step forward in the northern direction seven steps with the words: “one step for sap, two for juice, three for wealth, four for comfort, five for cattle, six for seasons, friend be with seven steps united to me”. This ritual is important from the legal point of view, for the Hindu marriage is regarded legally complete only after it is performed.

The rites cited above are performed by a Brahmin priest in the presence of the sacred fire and are accompanied by the Vedic mantras. “They are necessary for marriage to be complete, because when they or any of them are not properly performed, the marriage may be legally questioned. Hindu marriage is a sacrament. It is considered sacred because it is said to be complete only on the performance of the sacred rites accompanied by the sacred formulae”.’

(C) Sacred Beliefs and Values involved in the Hindu Marriage:

The Hindu marriage is a sacrament from the point of view of the sacred beliefs and values involved in it.

According to the traditional Hindu belief, martial bond is said to be inseparable and irrevocable. The parties to the marriage cannot dissolve it at will. They are bound to each other until the death of either of them. The belief states that the wife is, supposed to be bound to her husband even after his death.

This concept of marriage that is indissoluble is itself a sublime one which makes the husband and the wife to adjust their tastes, tempers, ideals, interests, choices and preferences. It thus involves sacrifices on the part of both the husband and the wife for each is called upon to bear with the other. Each individual is here called upon to make marriage a success by means of compromise and adjustment.

(ii) Belief that marriage is a social duty towards the family and the community:

The question of conflict between the husband and the wife did not perhaps arise in the old days for it never involved purely individual interests. The husband never expected any intellectual co-operation from his wife.

The wife was more of a passive partner in the performance of religious duties than an intellectually active participant in all his affairs. “Marriage was a social duty toward the family and the community and there was little idea of individual interest”.

The social background provided by the authoritarian joint family and the semi-sovereign caste never gave any scope for the recognition of any personal factor, individual interests or aspirations, in the relations between the husband and the wife.

(iii) The ideal of ‘Patirvratya’ associated with marriage:

As per the ideal ‘Pativratya’ popularised by the puranic writers, the wife is expected to be devoted to her husband alone. It implies that fidelity and modest service to the husband are the sole duty and main purpose in her life.

As a river merging itself in the ocean loses its identity so a wife is supposed to merge her individu­ality with that of her husband. Her only concern in life is to provide all services to the husband; for the satisfaction of her husband is her sole joy in life. The wife is expected to prove herself as a real “sati” with all dedication and reverence to the husband.

i. The Glorification of ‘Sati’ System:

The ideal of ‘Pativratya’ was stretches too much. It made the wife to be not only attached to the husband as long as he lived, but even after his death, because a ‘sati’ could never conceive of a second marriage or a second husband. Hence on the death of the husband the wife had either to live chastely, renouncing all the joys of life, or to follow her husband by jumping into the funeral pyre. The ideal of pativratya gave rise to and glorified the practice of ‘sati’ or self-immolation.

With the passing of time, the ideal of Pativratya became to deep-rooted in the mind of the Hindu woman that immolation became not only customary but a woman’s highest aspiration.

ii. Marriage, the only sacrament for women:

The Hindu marriage is a sacrament in another sense also. A Hindu male goes through the performance of several sacraments during the course of his life. These begin with the laying of the foetus and end with the cremation of his body.

For the Hindu woman marriage is said to be essential for it is the only sacrament that can be performed for her. The Hindu women normally prefer to marry and aspire to marry for they know that the unmar­ried women are always put to hardship in the Indian social set up.

Does the Hindu Marriage continue to be Sacred?

The Hindu marriage has undergone changes in the last few decades. These changes have given rise to two questions: (i) Does the Hindu marriage continue to be sacred? (ii) Has it lost its sanctity, or is it to be treated as a contract?

(i) The Hindu young men and women today marry not very much for performing religious duties but for lifelong companionship.

(ii) The martial relations are no longer treated as unbreakable, or irrevocable, as divorce is socially and legally permissible, and

(iii) The ideal of ‘pativratya’ has lost its significance for there is legal provision for widow remarriage and divorce.

The above cited changes in the Hindu marriage have not affected its main character. Widow Remarriages and divorces have not become the order of the day. Though they are legally permitted, they are still looked down upon socially.

Mutual fidelity and devotion to the partner are still consid­ered to be an essence of marriage. “So long marriage is not performed for sex gratification alone but for “living together” and “begetting children “, marriage will continue to be a sacrament for Hindus. Freedom in marriage [mate selection, etc.] does not destroy but rather confirms the stability of marriage and purifies its practice.”‘

Changes are taking place in the Hindu marriage but they have not disturbed its universality and damaged its sanctity. As Kapadia writes, “….marriage continues to be a sacrament; only it is raised to an ethical plane. We rather go back to our Vedic ideal embodied in the ‘saptapadi ‘formula: “I take thee to be my companion in life.”